A Bias For Action 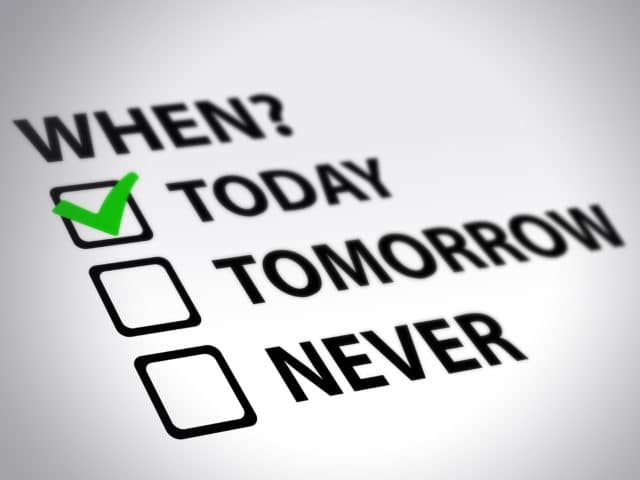 Early on in my career, I realized the importance of having a bias for action.  Every day, one is confronted with things that should be done at work, at home, in school or elsewhere. Decisions have to be made which ones to do first. For many, however, the decision that’s made often is to put off doing things for a later date. Either laziness takes over or, especially for major items, some are unable to act preferring to keep analyzing the options to arrive at the best possible decision. In effect, they get afflicted by “analysis paralysis” or over analyzing to the point that they are paralyzed to act.

A motivational article I read impressed upon me the importance of taking action. And so at the foot of my bed, I posted a big “Do it Now!” sign on the wall to remind me every morning as soon as I woke up to take action, not to procrastinate nor leave things that must be done for a later time.  I also included this phrase with other motivational phrases in a small booklet, which I tucked into my wallet. Occasionally, during the day, I would take out this small booklet, which also contained my written short-term, medium term and long term goals. This would remind me of my goals and focus me to take action towards the achievement of those goals. “Do it now” would always prompt me to take immediate action, to get things started. And I found that I accomplished a lot more this way, even if I was not completely sure of how exactly a task has to be accomplished. Sometimes the quickest way to find out if something will work is to jump right in and do it. You can always make adjustments along the way.

And that’s the other principle I discovered and applied in the way I did things- the ready-fire-aim approach.  Like “Do it Now”, the ready-fire-aim approach is grounded on a bias for action. You get ready, you fire and if you miss, you aim again. This is not recklessly taking action. Being ready implies that you’ve made some preparation, planning or analysis then you fire. In other words, you start implementation. Along the way, you “aim” or adjust your course of action to hit your target. I have experienced that this approach works better than the more common ready-aim-fire approach.

As Steve Pavlina explains, “the reason is that after you’ve “fired” once, you have some actual data with which to adjust your aim. Too many people get bogged down in planning and thinking and never get to the point of action. How many potentially great ideas have you passed up because you got stuck in the state of analysis paralysis (i.e. ready-aim-aim-aim-aim-aim…)? Thinking and planning are important, but action is far more important. You don’t get paid for your thoughts and plans — you only get paid for your results.”